· Remote users   Users within your organization who sign in to Lync Server from outside the firewall using a Virtual Private Network (VPN) when they are not connected to the organization’s network (for example, business travelers and telecommuters).

· Public IM users   Users of public instant messaging (IM) services, including any or all of the following: Windows Live, AOL, and Yahoo!, as well as XMPP-based providers and servers, such as Google Talk and Jabber. A public IM service provider is a specific type of federated partner. Support for public IM users has specific requirements that are different from the requirements for users of other federated partners. Customers that do not have a volume license for Lync Server 2010 will require a separate license if they choose to configure public IM connectivity with Windows Live Messenger, AOL, and Yahoo! For details, see http://go.microsoft.com/fwlink/?linkid=197275.

· Anonymous users   Users who do not have a user account in your organization’s Active Directory Domain Services (AD DS)or in a supported federated domain, but who have received invitations to participate remotely in an on-premises conference.

Your edge deployment authenticates these types of users and controls external access for the following types of communication:

· IM and presence   Authorized external users can participate in IM conversations and conferences, as well as obtain information about one another’s presence status.

In order to control communications across the firewall, you can create global policies that define how users inside and outside your firewall communicate with each other. You can also configure settings and create and apply policies for individual internal users or for specific types of external users to control communications with external users. For example, you can allow users in federated domains to access IM and presence but not A/V conferencing or Web conferencing.

* For PIC A/V peer-to peer support, you must use the new version of Windows Live Messenger. In this scenario, only audio is supported.

With your authorization, users who are logged on to your intranet can communicate with external users in the following ways:

· A/V conferencing   Meeting organizers can specify that meeting audio and video for conferences be hosted on your internal Lync Server deployment.

· IM and presence   Users can send instant messages and view presence status without using a virtual private network (VPN) to log on to the internal network. They can add users from federated partners and users of supported public IM service providers to their contact list, and they can view those users’ presence status, even while they are signed in remotely.

· Web conferencing   Users can participate in conferences as if they were logged on to the internal network.

· A/V conferencing   Users can participate in A/V conferences as if they were logged on to the internal network.

Essentially remote users have the same capabilities as internal users.

The functionality available to federated users depends on the option you choose during deployment. You can choose either of these options:

· IM and presence only   Users can participate in IM conversations with individual Lync Server users in your organization and access presence information, but they cannot participate in Lync Server-based IM multi-party conferences, it is strictly peer to peer conferencing. You can choose this option whether or not you deploy conferencing support internally.

The functionality available to federated and public IM users depends on the option you choose during deployment. You can choose either of these options:

· IM and presence only   Users can participate in IM conversations with individual Lync Server users in your organization and access presence information, but they cannot participate in Lync Server-based IM multi-party conferences, it is strictly peer to peer conferencing.

The basic functionality provided by a Lync Server 2010, Edge Server has not changed significantly from Office Communications Server 2007 R2, but the deployment options have. For example, the following options are new:

· DNS load balancing of both internal and external Edge interfaces

This document focuses on the impact these new options have on planning.

Lync Server 2010 places emphasis on the planning process and typically, the more time you devote to planning your Edge environment, the less time you’ll spend deploying it. There are four basic steps to planning but we will focus only on the first; the other three are covered in the Edge Deployment documentation:

Once you’ve run the Planning Tool and exported it to Topology Builder, it cannot be modified. You have to start over. By documenting your Edge environment, you avoid losing this information.

Therefore, the recommended approach is to use the drawing below to guide you through gathering the various FQDN and IP addresses that you need to enter into the Planning Tool. By documenting the current and proposed configuration, you can put the values in the proper context for your production environment. And, you are forced to think about how you will configure coexistence and new features such as simple URLs, file shares, dedicated A/V conferencing servers, and DNS load balancing. 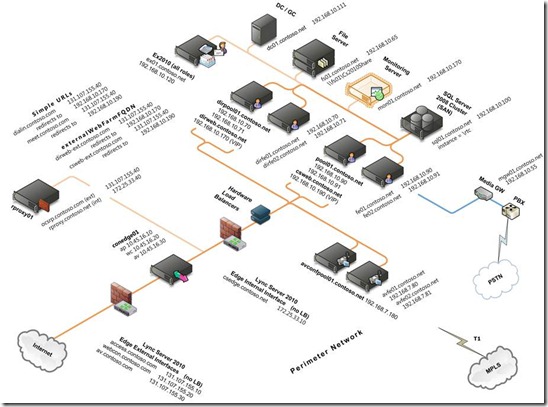 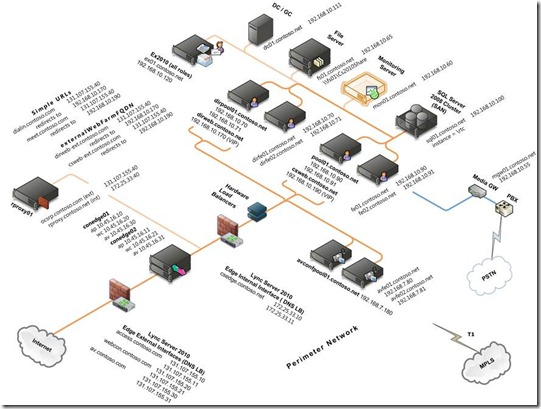 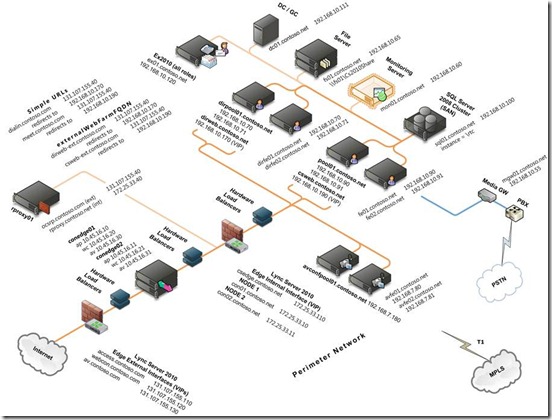 When you choose a topology, you can pick from the following supported topology options:

The following table summarizes the functionality available with the three supported Lync Server 2010 topologies. The column headings indicate the functionality available for a given Edge configuration option. Using the Scaled Edge (DNS load balancer) option as an example, you can see that it supports high availability, requires network address translation of Edge external interfaces, does not support publicly routable IP addresses, reduces cost because a hardware load balancer isn’t required and does not support failover for Exchange UM, public instant messaging (IM) connectivity (PIC) and federation with earlier versions of Office Communications Server.

· High availability   If you need high availability, deploy at least two Edge servers in a pool. A single Edge pool will support up to ten Edge servers. If more capacity is required, you can deploy multiple Edge pools. As a general rule, 10% of a given user base will need external access.

These three applications will continue to operate but they are not DNS load balancing aware and will only connect to the first Edge Server in the pool; and if that server is unavailable, the connection will fail.

You can follow any responses to this entry through the RSS 2.0 You can leave a response, or trackback.